Coventry Cathedral is a place of reconciliation between nations. Last week it also became a place where Christians are called to reconcile with the environment as part of “all God’s creation”.

Participants from various Church of England dioceses, ecologists, political campaigners, educators and technology experts gathered at the conference, “Reconciling a Wounded Planet” on 18-19 September in Coventry to coordinate responses to the environmental crisis and develop a common theology.

Speaking at the political engagement session, Ben Niblett, Tearfund campaigns team leader, proposed ways of mobilising the Church community in order to convince policy makers to include climate change in their agenda. “The Church is a home of values, a place of social capital. A group of people that come together to prepare and act. Massive changes can happen – you need to prepare to grab the opportunities,” he said.

One of the main issues raised by the speakers was a need to break through fear to address the environmental crisis and “normalise” its discourse. “We need people’s values to change first, so the policies can change,” said Richard Gower, director of Foresight Economics consultancy firm, speaking about the reasons some popular movements succeed in shaping public opinion and achieving systemic change.

In light of the recent fossil fuel divestment decision by the Church of England, Gower said every Christian should understand “it is just not acceptable for your pension fund to be in fossil fuels.” 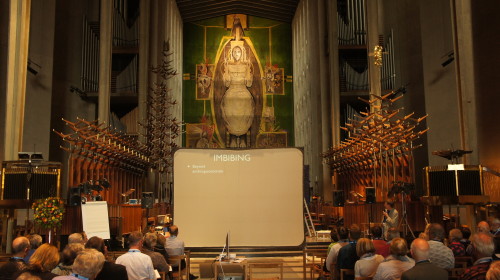 Participants also acknowledged the role of financial systems and global trade in the current climate crisis, while pointing out climate change should not be considered “a leftist issue” as it affects everyone.

Sir Ghillean Prance, professor of botanics and conference keynote speaker encouraged Christians to lobby at the UN Climate Change conference taking place in Paris in December: “If we truly want to reconcile, we need to expand. Let’s be a voice in Paris!”

A variety of dispersed local initiatives, lack of coordinated action and a theological imperative was pointed out by several speakers. “Creation care is not a good thing – it’s our mandate from the God. It is an integrated God’s mission in reconciling all things. It is not about equipping theologically, but challenging theologically. This is God’s will for us,” said Sam Berry, professor of genetics and former Church of England General Synod member.

The Revd Margot Hodson, vicar of the Haddenahm Benefice in Buckinghamshire, referring to the Paul’s letter to the Colossians, spoke about the responsibility of all Christians to care for the Earth as God’s creation: “Often we say we are the body of Christ and yet we don’t think about it. […] God holds the creation as a father holds a wounded child. Christ is the head of the Church and we are his body. Surely in some way we are holding it too and that’s why it hurts.”