The Archbishop of Canterbury’s own website has published a report on the book launch for Living Reconciliation where he was the main speaker. 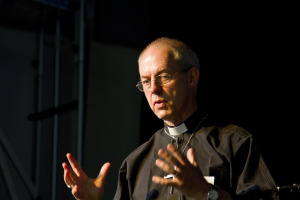 You can read the article here.

A new book which challenges Anglicans around the world to engage in reconciliation has been praised by the Archbishop of Canterbury.

Speaking at a launch event for ‘Living Reconciliation’ during General Synod in London today, Archbishop Justin Welby said the book offers a way for people to identify the barriers to reconciliation and begin to overcome them.

The Archbishop, who has made reconciliation one of the priorities for his ministry, said in his experience there is always “a certain holding back” in all human efforts at reconciliation.

“Most of the time, it’s a very significant holding back. In other words it’s not reconciliation, it’s learning more or less to scrape along with each other, rather than to love each other and be reconciled to each other.”

Archbishop Justin said ‘Living Reconciliation’ brings together “accumulated wisdom and applies it in a way that enables one not to skate round the issues and over the issues, but to actually sit down and work out what it is you’re holding back and how you can make serious progress at everything from the local to the wider.”

The Archbishop said the “only genuine complete reconciliation” is “that one between ourselves and God by Jesus Christ.”

“That’s the only reconciliation in which the very depths of our hearts and beings are transformed by the action of God, through a God who himself reaches out to us in absolute grace.”

‘Living Reconciliation’, written by two Anglican Communion Office staff, is designed to inspire ordinary people to live in a way that transforms their churches and their society.

Emerging from the life of the Anglican Communion and featuring stories from around the world, the book utilizes the theology and experience of Continuing Indaba – a project of the Anglican Consultative Council in response to the 2009 Primates’ Meeting.

Archbishop Justin contributed a foreword to the book, writing that he believes reconciliation can help “transform our world”.