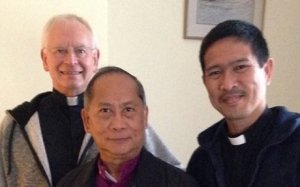 Canon Barry Naylor – Urban Canon, Diocese of Leicester and Chair of the Global Council of the International Coalition for Human Rights in the Philippines – writes about how the theological inspiration he received from reading “Naught for your Comfort” was amplified though his contact with the Iglesia Filipina Independiente.

My sense of vocation to the ordained Priesthood was awakened when I was a volunteer working at St Martin in the Fields and I picked up a copy of Trevor Huddleston’s “Naught for Your Comfort”, reflecting his ministry in apartheid South Africa. The interweaving of the sacramental life and fighting for social justice, springing out of a commitment to the Incarnation, made complete sense to me. I remember an encounter with God one spring afternoon in a cherry tree lined road in Totteridge in 1969, which did not allow of any turning back.

Throughout my ministry, I have brought my faith to bear on a range of social issues, relating to justice and peace. In 2004 I met a representative of the National Council of Churches of the Philippines, on a programme, organised by CMS, for young Christians from overseas to visit the UK. He told me of life in the Philippines, including the heroic stand of many Christians (and others) against injustice. I was invited, in 2005, by the NCCP to attend a fact-finding mission.

During this visit I met several priests and lay people of the Iglesia Filipina Independiente and had a meeting with the Obispo Maximo, Godofredo David, at the Cathedral of the Holy Child. I was deeply impressed with their commitment  to justice and social action – often in the face of hostility from the civil and military authorities. The Armed Forces of the Philippines listed the IFI as an “enemy of the state”.  When I met with the Obispo Maximo and a roomful of young priests, it was obvious that the threat posed by the military, and others, did not diminish the boldness of their witness, standing alongside the poor and suffering, standing up against multi-national companies and others seeking to exploit their labour and natural resources, standing alongside the poor land-workers in the struggle against unjust landlords. This identification with the poor was not some social action in addition to the Gospel, but was deeply rooted in their theology and worship – a living out of the Gospel of Jesus Christ. This resonated for me with the inspiration for ministry I received, many years earlier, from “Naught for Your Comfort”. Their witness continues to lead them into potentially dangerous situations but in our conversations, both in the Cathedral and out in the countryside, and, more recently, on Facebook and in Leicester, I see a profound and encouraging Christian joy and firm hope in the triumph of truth and justice.

In November 2004, 7 workers at a plantation were massacred and priests of the IFI were present in solidarity with them – ministering to the wounded, caring for the dying, comforting the bereaved. I saw a very distressing video of this massacre, and their work, at the USPG Conference in 2006. In the aftermath there was the assassination of Father William Tadena, a vocal supporter of, and pastor to, the estate workers. This was followed by the assassination of a former Obispo Maximo, Alberto Ramento on 3rd October 2006 – another minister of the Gospel outspoken in his support for the neediest and most vulnerable. Shortly before his death, he said: “I know they’re going to kill me next, but never will I abandon my duty to God and my ministry to the people”. His faith, his love of his Lord and of the poor, cost him his life. I am particularly moved by this because the 3rd October is also the anniversary of my ordination to the Priesthood – Bishop Alberto’s life and death reminds me, not only year by year, but also day by day, what my ministry is all about.

Members of other Churches, such as the United Church of Christ in the Philippines, the RC Church, the ecumenical Rural Missionaries of the Philippines, have all lost priests, ministers and lay workers in the struggle against corruption and for justice and peace in the Philippines. I feel a particular affinity, however, with the IFI, in their faithfulness in proclaiming the Good News to the Poor, their deeply sacramental worship and their Gospel courage. During the recent visit of the current Obispo Maximo, the Most Rev’d. Ephraim Fajutagana, I was deeply encouraged by the attitude of the IFI to some of the current debates in the wider Church – their openness, their desire to be truly inclusive, to build bridges. This Church which is the second largest in the Philippines, but which few outside that country may have heard of, has so much to teach us about Gospel living, often in hostile circumstances. I feel truly privileged to have had the opportunity to encounter this ecclesial community and will value, for ever, the friendships and encouragement I have discovered there.